I rate a book by whether I simply read it or I devour it.  This I devoured.

Empire is the story of a family who are eyewitnesses to the glory and the decadence of the Emperors spanning 4 generations from 14 A.D. to 141 B.C.  Over time the Pinarius family see murder, mayhem, and even the burning of Rome itself in the great fire.  They are not untouched by it.  One generation is molested by Caligula, one dies by his own hand at the final days of Nero.

It is a wild ride. Saylor is known for his Roma Sub Rosa series starring Gordianus the finder.  Normally his ‘detective’ works in a small microcosm of alleyway and lamp lit rooms investigating thieves, thugs and the famous (Cicero, Caesar, etc) only moving as far and wide as he can walk, ride or sail from his beloved Rome.  But in the book Empire we sweep across the generations, seeing a city, its empire and its emperors change through the eyes of a single family.

Early in the book the Pinarius brothers (twins) go their separate ways.  In the time of Nero one brother is the emperor’s favorite and the other a Christian in the shadows.   Many authors (especially Lloyd C. Douglas – The Robe, and Lew Wallace – Ben-Hur) held no secrets that their novels were settings of tales for the coming of Christianity.  Saylor’s book has an entirely deciding different track.  Saylor brings us Rome unvarnished and clean of 20th or 21st Century sensibilities.  We are seeing ancient Rome through pagan eyes, through the pagan temperament, and through the Roman Psyche.

A scene in the book is the great fire of Rome (remember Nero fiddling as Rome burned?).  Titus the proper patrician seeks out his Christian brother living in the Christian quarter.  It is hard thing to watch a city that you love destroyed, a fire that threatens your home and the memory of your ancestors, and witness your brother shout: “…the end of all things.  Praise God!”

What would your reaction be?  I mean as a Roman.

“Watching the gruesome punishments of the arsonist gave Titus no pleasure, but it was his somber duty as a citizen, and as friend of the emperor to witness the event.”

For a moment I thought I had picked up a horror story instead of an historical novel.  Nero rounds up the Christians to take the fall, and makes a speech quite legal, quite logical, quite sensible before dogs rip people apart in retribution, or as the Roman’s might say “proper punishment.”   Saylor describes humiliations dressed up in ancient myth ending in death for the condemned.  He describes Christians used as human torches for the ‘convenience’ of the crowd so that the games can continue into the night.   It is then Saylor masterly changes the perspective, and for a moment I too was in the arena.   I literally felt a chill down my spine, a reaction frankly I did not expect.   I only felt this once before and that was while reading Stephen King’s novel: IT.

This epic switches to Lucius, another son of the Pinarius line.  We now stand next to him as he viewed the opening of the Flavius Amphitheater (known today as the coliseum) and are provided a seat to see an unapologetic presentation of slaughter for the amusement of the crowd.   The slaughter is presented proudly, and how else ancient Romans describe such a spectacle?   It represents power, the unquestionable demonstration that the Roman people are favored in the eyes of the gods.

Saylor opens the book with an interesting quote from Gustave Le Bon who studied the psychology of crowds:

“History is scarcely capable of preserving the memory of anything except the myths.”

Why would Saylor pick this quote to open his book?

I suppose it has to do with context.  Le Bon lived during a period where the word ‘Emperor’ was still fresh in peoples’ minds.  He saw a tendency for historians to mythologize Napoleon Bonaparte – a man that brought great destruction upon the continent of Europe and had power equal to any Roman emperor.

However, Saylor presents raw and undiluted narratives of the emperors, and he supports it with research from the works of Suetonius, Plutarch and Tacitius.    He avoids mythologizing them, but lays them out warts and all.

I highly recommend this book to the listeners of Ancient Rome Refocused.  It’s hard to put down and keeps your attention like listening to a good storyteller at the Esquiline Gate. 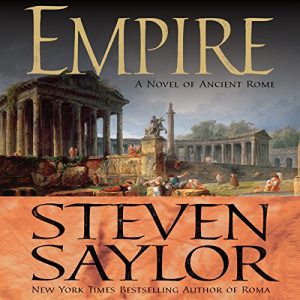